This tutorial is for Windows 10 and Windows 8, if you wanted to see the process for windows 7 or vista then >>Click Here<<

So, now the question what we are normally wondering about is:

What Is This “Startup Repair” Or “Automatic Repair”, By The Way?

As I say both features are same and it’s a very useful and effective Windows Repairing tool and the main work what’s this feature do is to repair your windows when something prevents your Windows from starting or your Operating system having some problem to boot itself.

What Is This “Startup Repair” Or “Automatic Repair” Actually Do In Our Windows?

Startup or Automatic Repair is one and only recovery tools what you’ve windows having to repair windows starting problem quickly because this effective tool is intended to repair only certain glitches like, missing or damaged system files who mainly used to load your windows operating system.


What Is This “Startup Repair” Or “Automatic Repair” Can’t Able To Fix?

The bad thing about this feature is, it can’t show you what’s creating the problem to start your windows. It won’t help you recover your private files and documents. It also can’t detect or fix hardware failures nor does it help against virus attacks and their damages.

So, it’s only gonna fix some certain things or otherwise it will show you, startup repair cannot repair this computer automatically or automatic repair couldn’t repair your PC.

#How To Use “Startup Repair” And “Automatic Repair”?

When you Turned ON your Computer and it shows your BIOS logo screen, quickly press the “Shift” key and repeatedly press the F8 Key again and again.

Sometimes it won’t works for the first time, but keeps trying and when you successfully open it, it will show you the Recovery Mode and you can see the further step listed below after some windows disc booting thing.

If you can’t able to open it by Shift and F8 key then the only option what you have is to open it by Windows Disc or Windows USB Pendrive.

To Open Startup Repair Or Automatic Repair By Windows Disc:

How to Quick Boot A USB or CD/DVD Directly From the Boot Menu ?

How To Change the Boot Order (Boot Sequence) in BIOS ?

After that, it will show you three options and you’ll need to select the second one called “Troubleshoot” and then right under the troubleshoot menu select the third option called “Advanced options”. 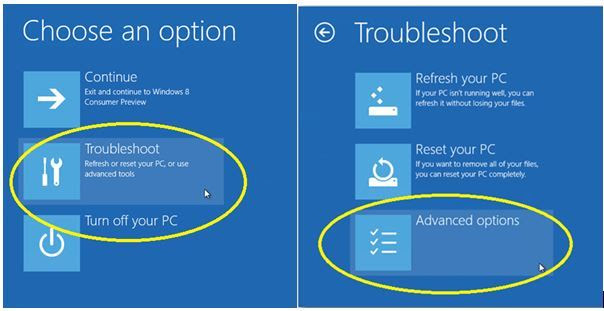