Tips To Install Laptop’s SSD Into The 3.5 Inch Desktop Bay

Due to the immersive transfer speed offered by the Solid State Drive, or more simply SSD. Nowadays they are being preferred more as compared to the normal Hard Disk Drive, or you can say HDD.

They are actually, 5 to 6 times faster than the normal HDD and you can easily use them in any of your consumer’s PC;

In the recent past, they were not the people’s choice mainly because of its expensive price tag;

But as the technology get advanced, the price of SSDs also dropped, and they became a lot cheaper and nowadays everybody is starting to using it.


They are light, compact, occupy less space as compared to the big slower hard drives and not just that, it mostly comes in the 2.5-inch form factor.

And that’s the part where the small size become a problem for most of the users;

It just happens, because the small form factor drive isn’t able to fit properly into the desktop 3.5 inch drive casing.

And with the help of this article, now I’m going to show you some of the different methods what you can use to fix your SSD’s installation problem.

Apart from the SSD, the laptop’s HDD are also only available in size of 2.5 inches;

And you know? Most people actually keep their laptop’s hard drive with them and just sell the laptop. Just to use that drive in their computer, just because of the same interface connector.

Normally, to install a 2.5 inch Solid State Drive you’ll need to have a “2.5 Mount for the 3.5 Bay” installed in your computer. Other than this, whatever you do with your computer but this is the proper way to perfectly install a small size drive in the desktop’s cabinet.

And the reason why I mentioned the word “Fit” in this article’s headline;

Because a lot of people just buy a new 2.5 Inch Drive for their computer and forgot to buy the “3.5 bay mount”, and when the drive arrives, they just place the drive anywhere in the computer’s cabinet.;

They just stick or tie the drive with some wire or a threat or maybe just place the drive anywhere on the computer.

A lot of people do this in their small size drivers but the thing is, after some time the drive starts to fail the work;

And It’s all happened just because of your computer’s Cabinet.

The reason is, most of the computer’s cabinet is made up of metal and that metal can short the circuit of your hard disk, which mainly located on the downside of your hard drive.

But the other great thing is;

SSD’s user can fit the drive anywhere in the cabinet because both sides of an SSD is made up of fiber. As you can see in the picture given below: 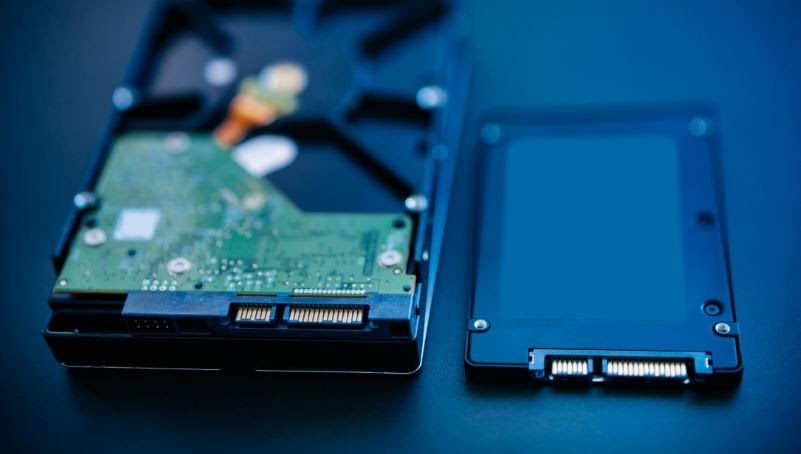 #Let’s See How To Fit a Drive;

I lot of people think that “Why they need a mount or an adapter for installing a small size drive? Where they can simply fit the connection and it will work perfectly.”

Without any doubt, the HDD will work perfectly. But Let me tell you a story;

A friend of mine had an old laptop which he wanted to sell. One day he found a good customer and sold the laptop, but unfortunately, he decided not to gave the internal hard drive.

He removes the HDD and just sold his remaining laptop. You know, a lot of people do that;

So, at back then he got an extra space of 1 Terabytes and just like everybody. He decided to use his old Hard disk into his PC, just to add the extra storage device.

He connected the cords with the drive and simply placed his old laptop’s HDD over his PC’s old hard drive, and not tightened any screw;

Hoping, that it will not move further.

And that’s the point where he was wrong!

The hard disk worked perfectly for some days. But due to some movement of the old big hard drive and two old dirty fans;

His hard disk starts to moving whenever he turns ON the computer.

And then that time comes, when the small hard drive slipped off from the existing HDD;

And you know, due to this, his hard disk got fully damaged and he lost every bit of his data. It was only because of the fact that he did not installed his drive properly.

Look, this is what I suggested to my website’s guest user, to fit his SSD without using a mount; 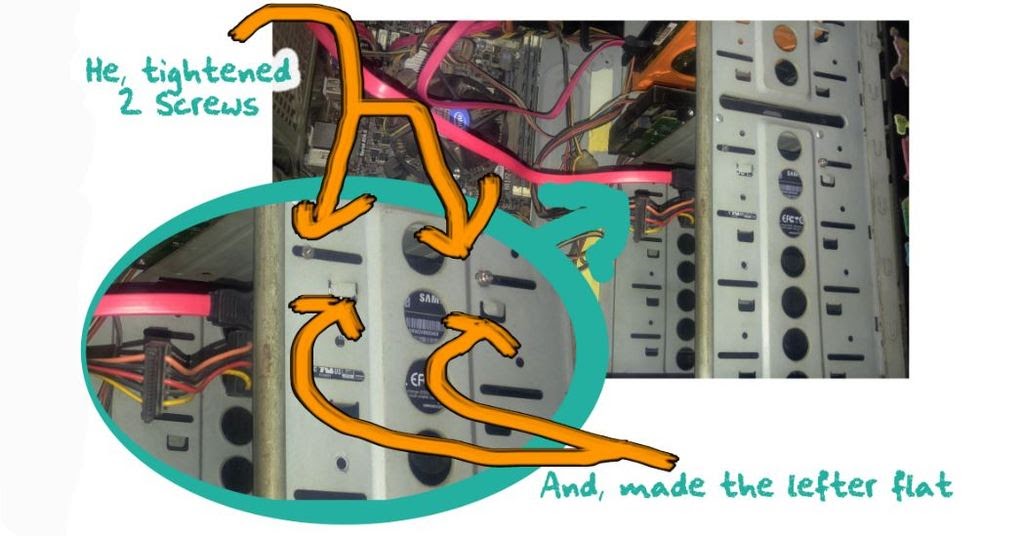 #Now, Let’s Look Over To How to Install 2.5 Inch Drive Properly In Desktop Computers;

First of all, don’t do sometimes which can make your device got damaged. Just follow the easy instructions to install any of your 2.5 inch storage device like SSD or HDD into the 3.5 inch desktop bay.

Step 1: First, power off your computer and then open the Computer’s casing by using a screwdriver.

Step 2: After opening the case, locate the free space in the hard disk bay.

Step 3: Once you located it, now you’ll need to use an Adapter or a Mount to install the device perfectly.

Step 4: While using an adapter, properly install the device in that adapter and screw it in the bay by using some screws. Make sure that you have tightened all the screws properly and fit that adapter in the bay;

While using a mount, placed the devices on the mount and tight it up by using the available screws.  After that, place the mount in the bay and fit it properly with the screws.

Step 5: Now connect all the necessary cords to your 2.5 inch drive.

And at last, properly close the cabinet and now you can start to work on your PC.