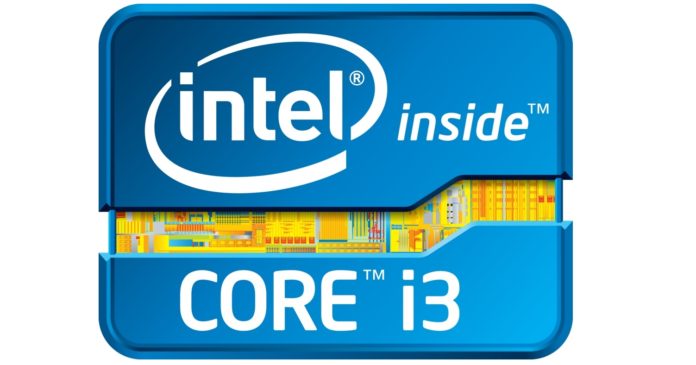 List of Top i3 CPUs Which You Can Buy for Gaming, Business & Budget Build

A perfect processor doesn’t means, that the processor must be always high end;

But the perfect means, that the work which you wish and wanted to do on your computer must be handled perfectly by the processor or may be worth the money you spend. Whether it’s gaming or some official work, the processor must need to do that work perfectly.

A lot of people asks me about ‘How do we know which processor is perfect for us?’ and I always say, it fully depends on your own computer use.

And you know, there are actually a lot more factors just to find the perfect CPU for our PC;

But In case, if you still aren’t able to decide which CPU did you wanted for yourself, then you can check out my this article about >> “How To Buy A Perfect Processor (CPU) For Desktop PC?“ and this will help you.

The i3 processor was considered to be the budget processor when it was mainly launched. But time to time the processor gets advanced, and right now the specifications of latest i3 processor got upgraded pretty much.

The first i3 Processor was launched in 2010 and from then, the higher new processor generations still launch from time to time.

And still some processors of the 8th Gen aren’t available in the market.

An i3 processor can be a perfect CPU for any person who mostly uses their PC for only normal stuff. Suppose that you only do Internet surfing, watching movies, playing songs, making office’s presentation or spreadsheets and much like that and If you’re planning to buy an i5 or i7 processor for this type of work. Then no doubt you are just wasting your money because an i3 can do all that work too. Thus, buying an i3 is perfect for that class of computer users.

From starting every i3 processor has 2 cores in it or I can say that the i3 was a dual-core CPU;

To get a taste of 4 cores, before we at least need to buy an i5 Processor. But thanks to Coffee Lake Series, now you can get the i5 like performance in i3 CPUs.

I compared the benchmark record of two CPUs, first one is the i5 7th generation 7600K (which was the top-end CPU of the previous generation i5 Series) and the second one is the latest i3 8th generation 8350K;

And believe it or not, but I can’t find any performance difference which is unbelievable because there is a huge 120$ price difference in between these two series.

A lot of people also asks me, that they can do gaming on the i3 processor?

You know, the 8th generation CPU can give you the frames rate for about 60-70 FPS on most of the heavy graphics games at 1080p (but it all depends on what Graphics Card you’re using).


So, Let’s See How Many Best i3 Processors Are Available In The Market;

The latest generation CPUs of i3 is actually the greatest, under 170 dollars you can actually get the top end processors of the i3 Series, which can even overclockable;

So, stay continue to know more.

#Before Gets Start, Let Me Tell You One More Important Thing;

Everybody knows that upgrading your old processor to a new one is a great idea. You’ll get more performance, better results and best experience.

But in case, if you are searching for the i3 processors for your new hardware upgradation;

Then you’ll have to make sure about that your motherboard is compatible with the new i3 processor or not. i’m only saying this because all the processors mentioned in the list are from 8th Generation, which actually doesn’t work on any old Generation Motherboard. 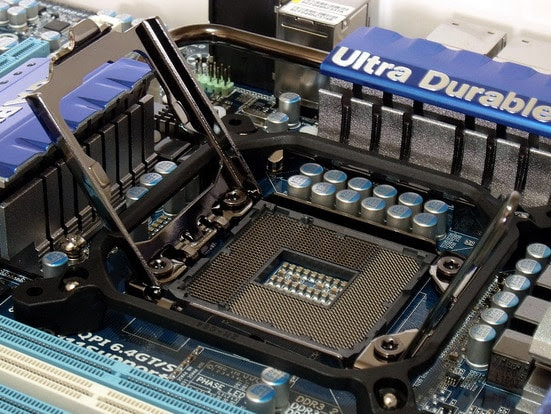 So, let’s start with the; 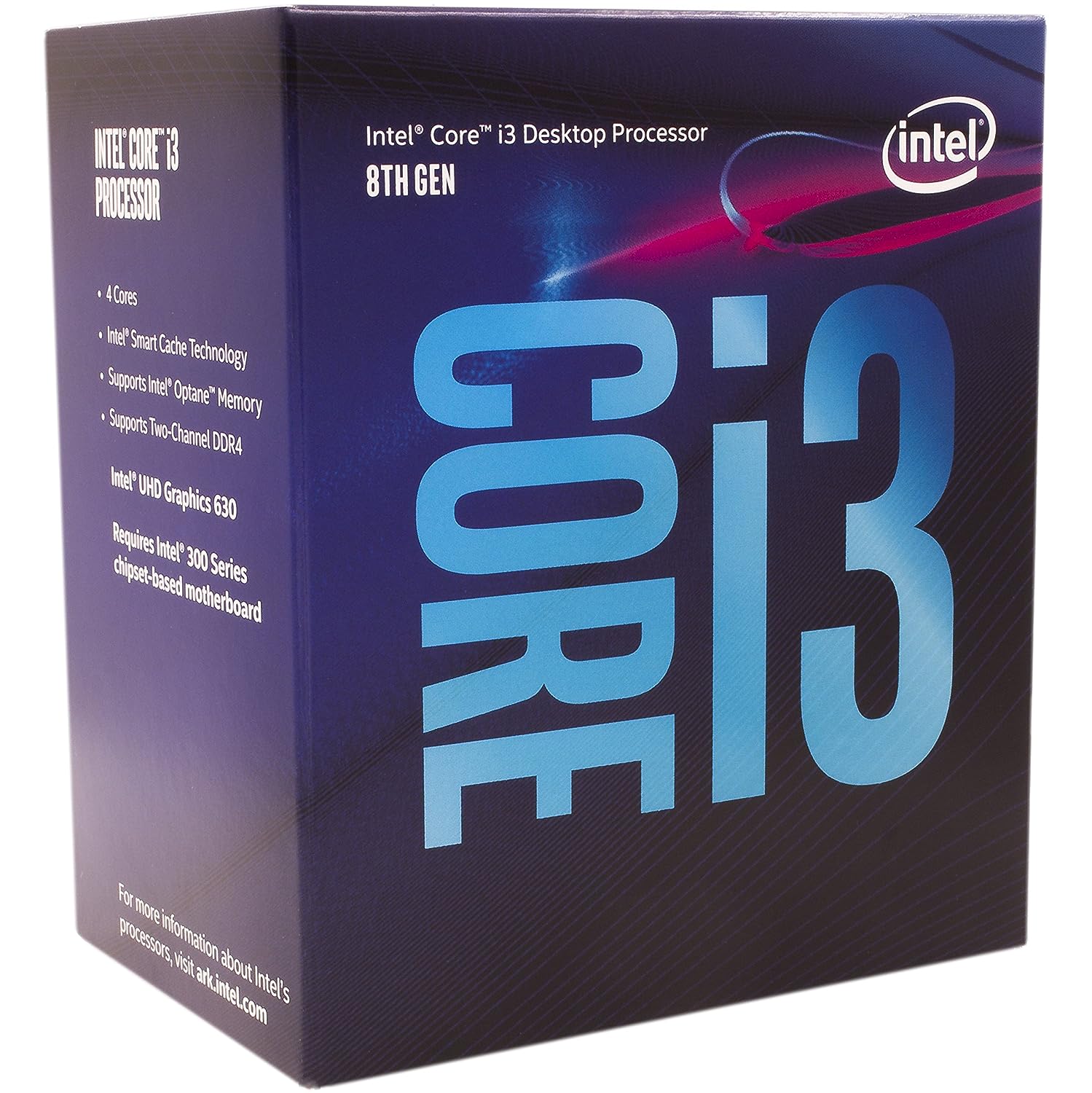 About It: This is the 8th Gen or I can say a Coffee Lake Series CPU and it was mainly launched in October 2017. This is the first model of this series who also came out the first in the market.

It’s basically a budget processor which can fulfill all the basics demands of its user. It has 4 cores which can clock at the speed of 3.60 GHz. This model comes with a cache memory of 3 MB, and the best thing about its cache memory is that it’s the Smart Cache Memory which is perfect for the great performance. 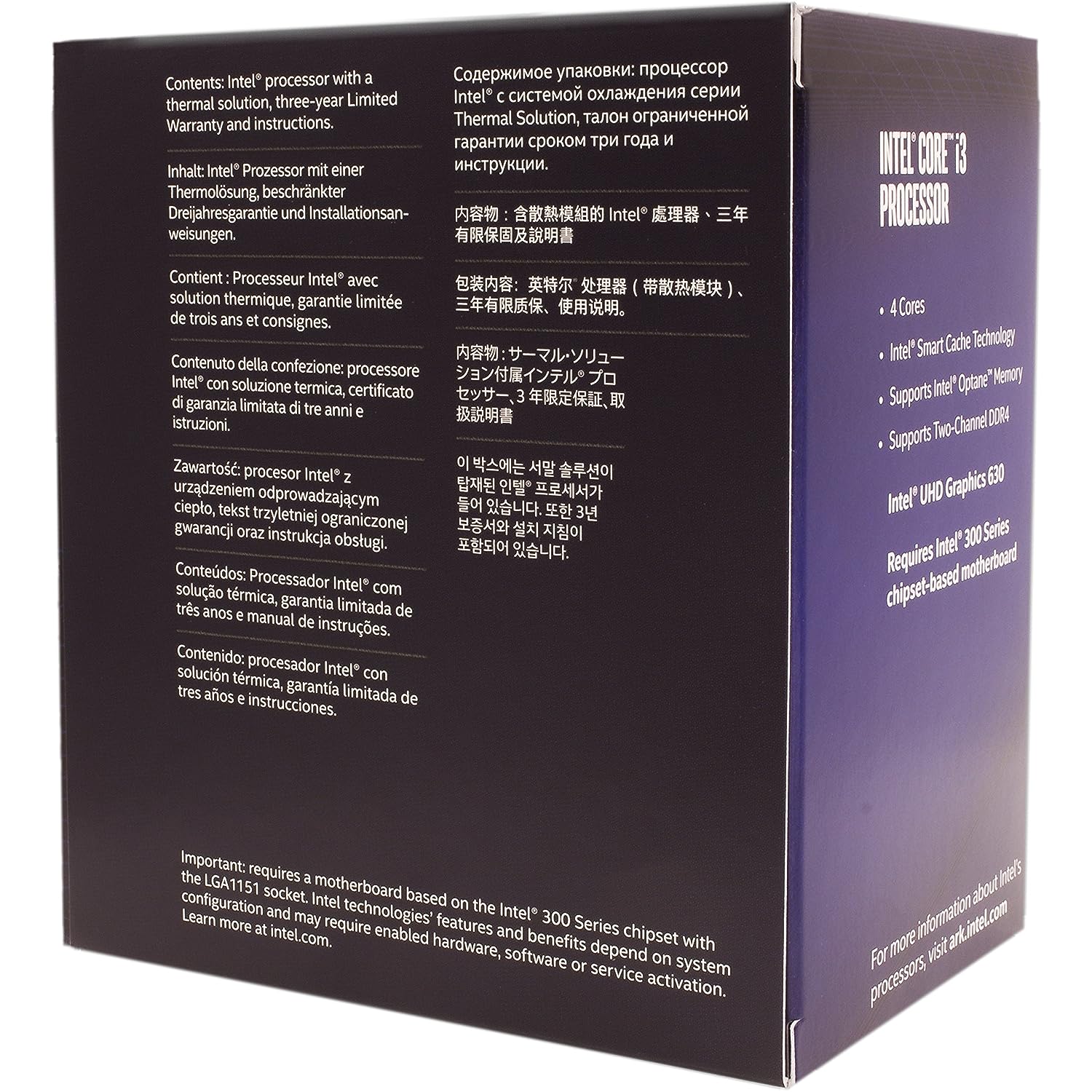 The memory is required the most when a gamer wanted to do some heavy FPS HD gaming, or maybe not just gaming, what if somebody wants to run some heavy process who takes the higher memory usage;

And for that, this CPU can support DDR4 memory up to 64 GB which is enough for a CPU like this. So, I don’t think you’ll run out of memory limit compatibility.

If you didn’t plan to buy a graphics card, even then this processor can display some amazing graphics on your PC’s screen (even in 4K), as it has an Integrated Graphics chip of Intel® UHD Graphics 630.

The graphics chip can clock up to 350MHz and supports the latest DirectX 12 so you can enjoy your gaming to the maximum. This processor has 16 number of PCI 3.0 lanes so you can connect any Graphics Card, LAN card or anything you want.

The gaming performance was not so satisfying. I would not recommend this for gaming because of its low performance. But for any type of normal work, this processor can show you its greatness, but just not for perfect gaming.

Just grab it, if you need something worth-full under the budget.

About It: Another 8th generation CPU but a bit powerful than the 3rd one. In every condition this budget CPU will perform the task even without having any trouble for you, as this processor can support up to 3.70 GHz of Clock speed.

It’s a Quad-Core processor and each core can clock up to 3.7 GHz with the ultimate 8 MB SmartCache, which is quite a big deal from Intel just for 150 Dollars.

The integrated graphics chip is also good too, and you know in all the 8th Gen CPU comes with the latest “Intel® UHD Graphics 630”, where it can clock upto 350 GHz.

The graphics provided by the CPU is Ultimate!! You can actually, connects any 4K display to your computer, even without having any graphic card in your computer;

And of course not, I’m not talking about the 4K gaming. 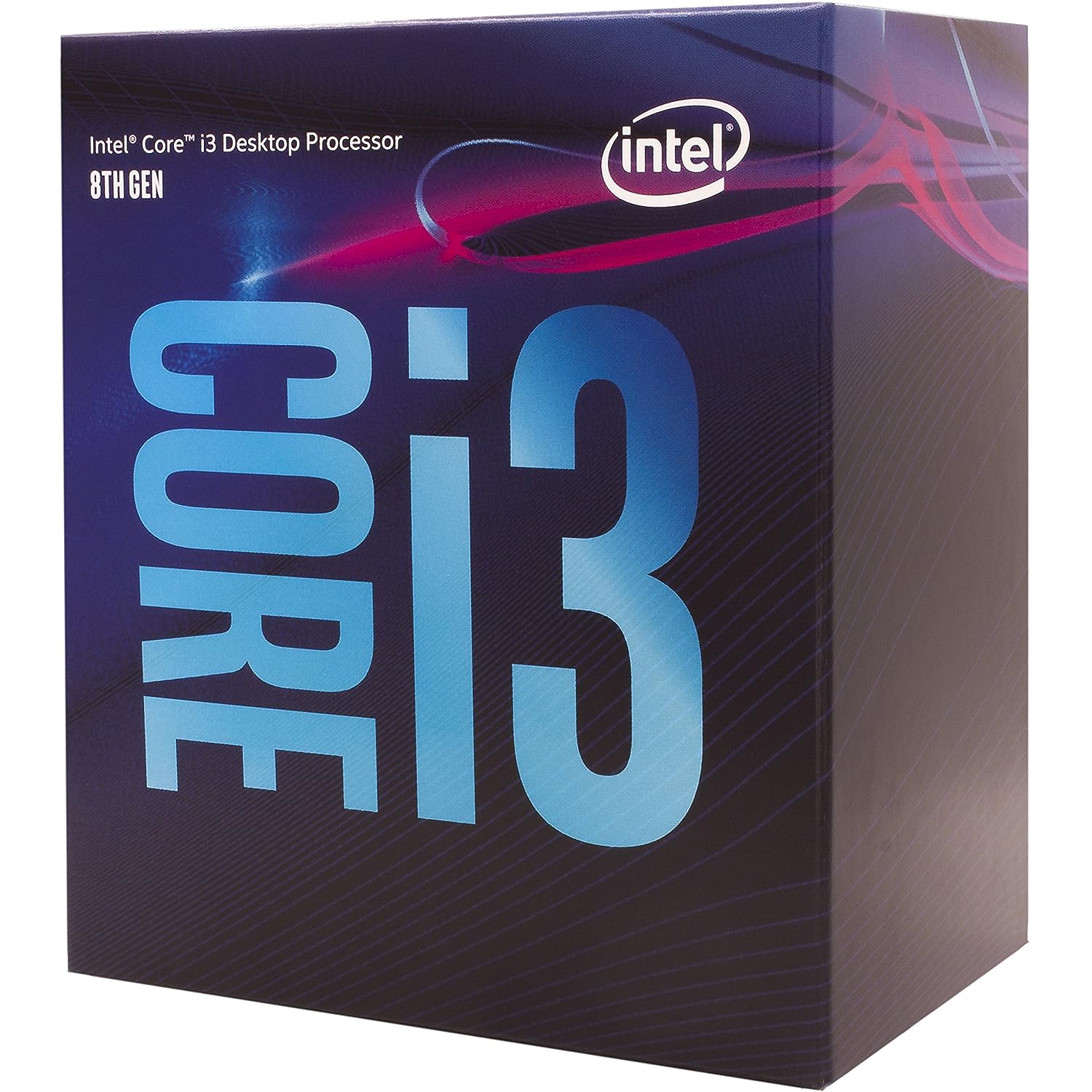 It also has 16 lanes and supports the latest Windows 10 DirectX 12. And the gaming on this processor was quite amazing!!

When it comes to gaming, this processor does some great job!!

You can actually play all the latest games on this processor, with much better-detailed graphics and performance.

And you know, when I fixed this processor with my GTX 1060, the results were amazing. All games were running at completely lag-free, even when the graphics settings of the games is on ultra-high at 1080p.

And I got frames rates of about 68-70, which is amazingly good for a low-cost processor like this, and for sure I can say this is the best processor which you can buy for some extra performance by just only adding some more 30$ in your budget as compared to the previous one because this CPU is available for just about 150 dollars. 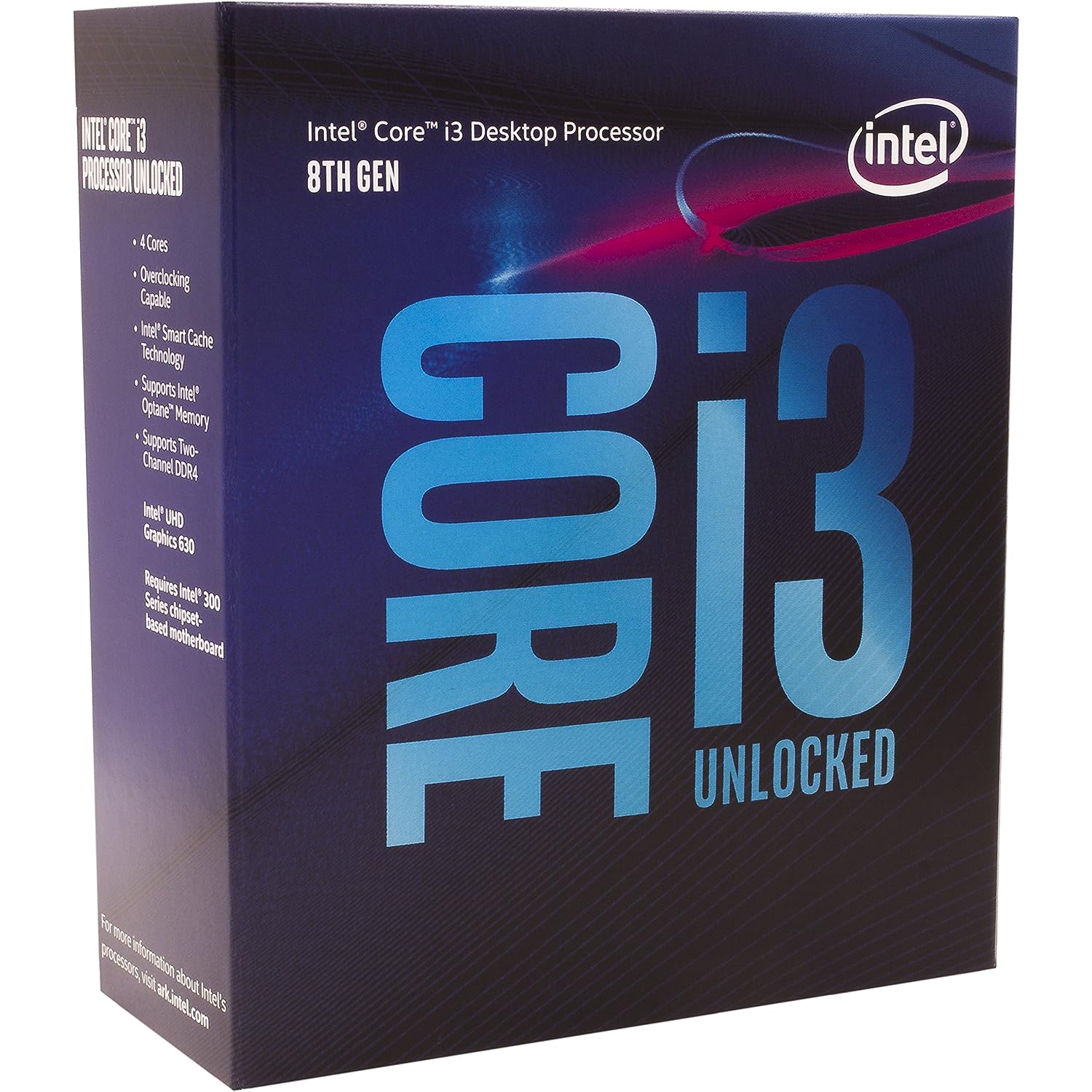 The performance offered by this CPU is undoubted, and not just that, this one is also the best performer CPU of the i3 Series . Just like last two, this one also a 8th Gen CPU, but the difference in this CPU which really makes it different from the others, is having the word “K” mentioned at the end of its model no.

Which means hell yeah!! You can overclock the i3 too;

This processor is very popular for gaming. 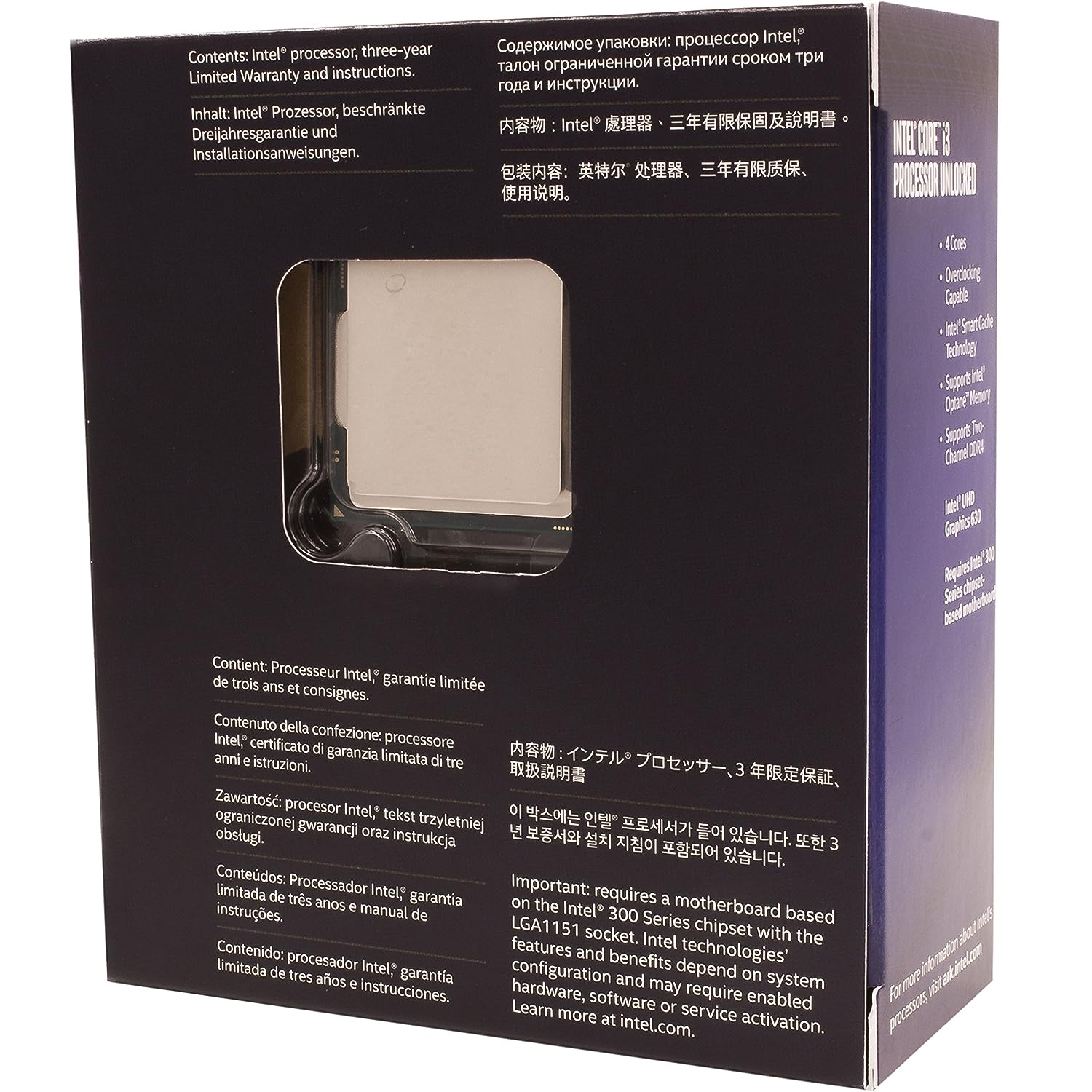 It also integrated with the graphics chip of ‘Intel® UHD Graphics 630′ and the DirectX 12.

It has 8 MB SmartCache memory;

The Cores can be able to clock to an amazing speed of 4.00 GHz. Since the processor is unlocked i.e. the model number has “K” mentioned, you can increase the performance of this processor by overclocking it.

A lot of people taking on the internal that they overclocked their CPU to the 5.00 GHz, but I just don’t know why;

When I personally overclocked my 8350k, it was only able to get 4.8 GHz performance, which is actually also quite noticeable for a low-end CPU this.

just like other two, you can also expand your memory up to your need as this processor offers the expansion of memory up to 64 GB of DDR4 RAMs.

Let’s come to the gaming now;

This processor is the boss, by connecting this CPU with GTX 1060, you can actually play any high graphics game on ultra setting on the FullHD 1080p display.

The latest games like Rise of Tomb Raider, I got frames rate of about 90 FPS, The Division got 63 Avg. FPS, Battlefield 1 got 84 Avg. FPS and other games also got FPS of around 75-79 FPS Average, which is insanely good for a low-cost CPU like this.

So, if need the best in class i3 Processor, then just go for it;

And if you bought it as per my recommendation, then I can surely say’s that this processor never let you down in any type of performance needy condition.

And that’s our list of top 3 best i3 Processors what you can get for your Desktop Computer. Stay tuned for more! – So, what will you pick, if you wanted one for yourself? Let me know in the comments below: 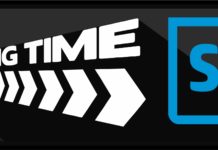 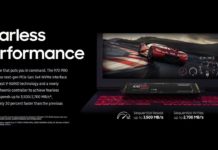 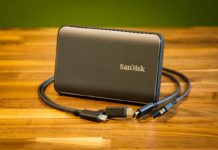 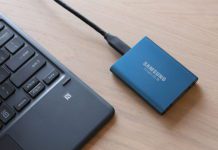 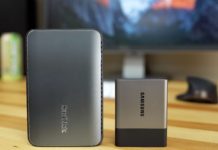