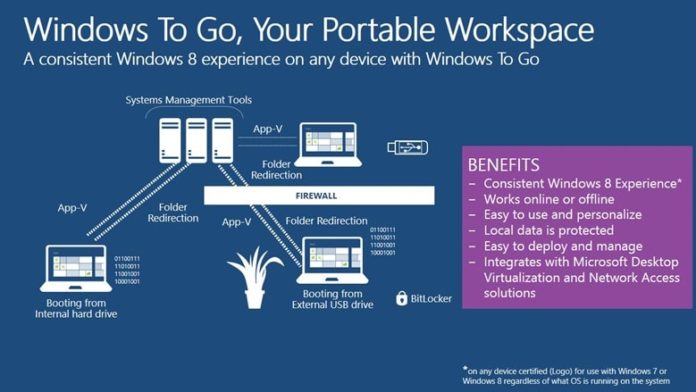 Windows To Go – A New Way To Install Windows

We’ve discussed the benefits of Live Operating System in our previous article, and we pointed something missing in them: no Windows options.

That’s still true, but there is a little bit of leeway on that.

Yes. Windows to Go, announced back in 2011, is a feature in the Enterprise Editions of Windows 8, Windows 8.1, and Windows 10, that allows them to run and boot up from (certain) USB devices.


Upfront, this doesn’t offer you as much freedom as the other Live Operating System because it was never meant to be a portable option supplanting those already on the market (Although it can be used as a USB boot in a pinch).

It is instead more focused on providing support and resources for alternative workplace scenarios. It’s unmistakably and unapologetically designed for office use. 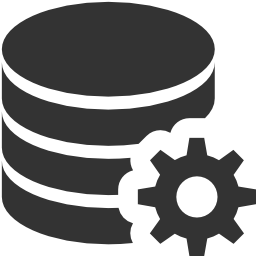 It offers some of the advantages of a Live Operating System, with a few glaring exceptions, the biggest of which is that your internal drives will be turned off by default so that you work out of the USB and only out of the USB storage.

This creates a security measure that prevents data from being accidentally disclosed to an unauthorized user if he simply plugs a drive into your system and boot up the OS from there, but the flip side of this is that it also hinders the major uses of a portable boot drive like the Live Operating System, such as Data Recovery.


You’ll still have to rely on Linux for those;

And you know, the Local partition of the previous Operating System which is already installed on the computer, however, will remain offline no matter what, and cannot be accessed.

It’s also important to remember to plug the drive into a 3.0 port – while the drives don’t affect the backwards compatibility of USB ports and can be accessed and used to boot up the operating system via 2.0s, this will significantly affect the performance of the OS due to the much slower data transfer speed of the older port.

Even on 3.0s, some occasional but brief freezing can be expected, though this doesn’t usually cause bottlenecking unless you have something like two hundred tabs open on your browser and all of them streaming HD video.

You’re running an entire OS out of a drive, so don’t be a douche to your PC. Actually, you can follow that as a general rule of thumb and it won’t steer you wrong.

#So, What, No Portability?

This is not to say that the feature doesn’t allow you move an OS bootable installation around because it does.

When you first plug the drive into a system, Windows will analyze the hardware and automatically install the required drivers for smooth operation, and then it will remember that particular computer.

So when you go off, use the drive on a couple of other systems and then come back to the old one, you won’t have to install the drivers all over again.

A big plus, and aces as far as we’re concerned. This will allow you to use the installation from multiple computers, and once you log in to your Microsoft Account, it will load up all your settings, wallpapers, preferences and apply them automatically to the computer you are using.

This is also the case for preference in Windows’s own applications, such as Office, which will have all your preferences applied to it as soon as they load up.

Not all programs are so easy, though: remember that many of the apps from the Windows Store are linked to your hardware for licensing purposes, so moving it to another system will render something that you previously purchased to become unusable.

Not good. Windows Store is flat-out disabled in the Windows 8 version, and visiting it will throw up an error message, though there are unofficial workarounds that help with this.

All that might make it sound like something which doesn’t have plus, points, but that’s not true. Aside from the plug-and-play OS boot, it can provide between multiple systems – and this is especially useful if you just want to share settings and move your workspace around a few systems on a regular basis, like in an office.

Unlike Live Operating System installations, Microsoft also offers USB drives that come with the Windows To Go version already pre-installed on them, which makes portability a cakewalk for anyone with a Microsoft Account for numerous supported applications.

#So, It’s Also Possible To Create The Bootable Drive From Scratch Yourself, How?

There are several “Certified” Windows To Go Drives that are recommended for WTG installation. “Certified” means that drive has passed Microsoft battery of tests and been test-driven for maximum compatibility.

Hey, look at that, WD. WD actually recommends their 500GB My Passport Enterprise as the best option – designed with the best performance for Windows To Go in mind. This will allows installation and enough space for system files and programs.

But I don’t give you any guarantee about that.

#Regardless Of Which Drive You Pick Let’s Get Right Down To The Procedure:

So, Simply type “Windows To Go” in the start menu search bar, and hit enter to go to the Windows to Go Control Panel. It will show a list of drives to which you can create the Windows to Go Image. Pick the one you want; 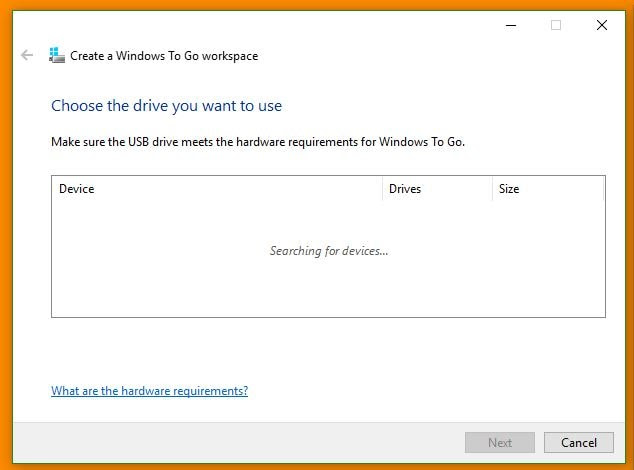 Browse and find the ISO or physical disk for the creator. Enable Bit locker Protection – this will protect your drive with a passcode so it cannot be used anyone else if it is lost. Click on Create. Wait. This takes a while;

Once it’s done, plug out the drive, and enjoy Windows in your pocket!