Everything You Need To Know About – WiFi Driver

Nowadays, I think, it’s not even possible that a normal person never ever used a Wi-Fi, until he/she is living with the tribes, and I’m only saying this because actually, Wi-Fi is everywhere;

Supermarkets, Malls, Movie theaters and you know, even some public toilets around the world is providing the Wi-Fi network, to just, I don’t know why?


But the important thing is, we all need an internet connection and everybody knows that Wi-Fi makes’ it a lot better, or I say a lot cheap, cuz nobody wants to eat their Mobile’s Data, where you can just plug any Wi-Fi router to any broadband and makes the internet wireless.

So, Back To The Topic;

To understand the WiFi Drivers, first, you’ll need to understand, What drivers is, and why actually our computer needed it for?

Basically, A device driver is a program which controls a specific device connected to the computer and mainly the device or hardware drivers, is just a set of files which enables the communication between the Hardware and the Operating System.

I know it’s a long story to tell, and to make it quick;

Spouse, just like Car needs a driver to work or run, your WI-FI hardware also needs a driver (which comes in a software form) to start to work and helps your operating system to find and connects to the every available wireless connection.

So, the point is, every Wi-Fi hardware needs a driver to make itself work;


Even whatever you are using, a laptop, desktop or a smartphone. And yes, it’s true that your smartphone’s WiFi also needs a driver, but you really don’t have to worry about it;

Because that WiFi driver comes preinstalled in the Phone’s OS;

And even if you change or update your phone’s OS, the phone’s Wi-Fi driver will get install along with the OS’s installation, isn’t it wonderful.

But just like as we all know, we definitely need to install the drivers in our laptop or computer after every reinstallation of the operating system.

#Or I Think Maybe Not;

Let’s take things a little bit more deep, yes, it’s true that every hardware need drivers to run, but that doesn’t clarify all the drivers needed to be installed by the user-end;

And I’m only saying this because you know, most of the times after when you install a new operating system in your computer or laptop, you saw that most of the computer’s drivers installed automatically in the OS.

I’m not talking about Mac, but hey!! I definitely know you’ll definitely see this while the installation of the latest windows;

And you know, recently, my cousin sister asks me to gift her a notebook, just cuz she passed the high-school. So, at the end, we agreed on a 250$ Notebook (who comes with DOS) which need to gifted by me, and she will buy the windows key by herself.

And when the Laptop and Windows Disc arrives, she just handed the whole package to me to install the OS, which I know, I won’t get paid for.

So, end of the story;

After when I installed the Windows 10, most the computers drivers, installed just after the first boot, and you know, I swear, I didn’t installed any drivers till now and her laptops work just perfectly fine.

The thing is – most of the computer drivers installed by the operating system and sometimes, it’s also gets done by the hardware’s-end too, like when you plug a pen drive into your laptop or desktop;

So, that’s how most of the time you really don’t need to install the Wi-Fi Drivers after when you reinstall your OS.

But a faulty, incompatible, or an out-of-date driver will prevent the operating system from communicating with the network, preventing or cutting off your connection to the internet (shudder).

A lot of Wi-Fi connections these days can work just right out of the box – especially USB dongles, which can deliver plug-and-play internet usage, but some might need drivers.

A Wi-Fi card or network adapter, on the other hand, absolutely does require a driver, and in case; 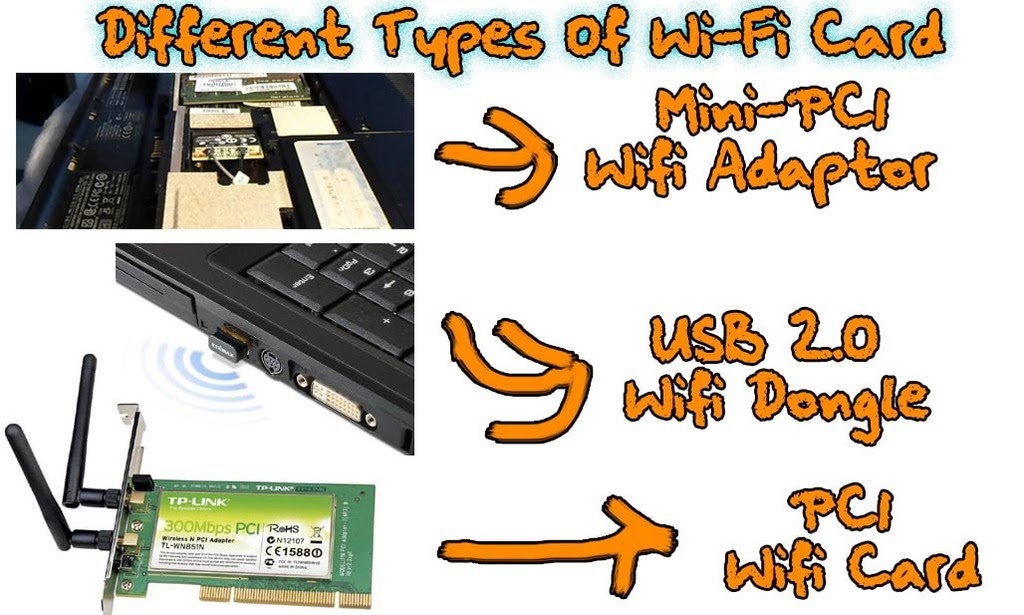 If you’re having connectivity trouble you should eliminate that as the source of the problem before considering the possibility of a hardware malfunction.

The process is fairly simple, and you can get it out of the way quite quickly.

The first step is looking up your hardware in the Device Manager – and this is the first step in fixing a lot of hardware driver-related problems, so it’s a good idea to keep this one in mind.

The Device Manager can be accessed in most systems by going into Start -> Control Panel -> System (or System Tools) -> Device Manager.

For Windows 10 users, this can be accomplished a bit easier using the hotkey Windows Key + X, which will open the Power User Menu from which you can simply select Device Manager. Similarly, in Windows 8, use Windows Key + C to open the Charms menu (not a very charming name, but still) then go to Settings -> Device Manager.

No matter what the version of Windows you are using, you can also find it by searching for it in the start menu’s search box. Or go to Run (Windows Key + R) and type devmgmt.msc and then press Enter.

A list of all the devices connected to your computer will appear on the screen. Go to Network Adapters and you’ll see an expanded list of your network cards. If you’re using a wireless connection your card should say “wireless” in the name.

Anyway, we’re digressing a little bit from the subject here; so let’s get back to it.

#Now Let’s See How To Install The WiFi Drivers;

To install the drivers, first, you’ll need to identify the type of hardware what you have and then search its name and model no. on the internet, just to download the latest drivers file of your WiFi.

You can also use the Drivers disc, only if you have a drivers CD/DVD, which comes with your laptop, or with WiFi Dongle or maybe your WiFi card, when you bought it new.

Here’s a picture which can help you know, what particular keyword you’ll actually need to mention on the google search bar, just to find the compatible drivers: 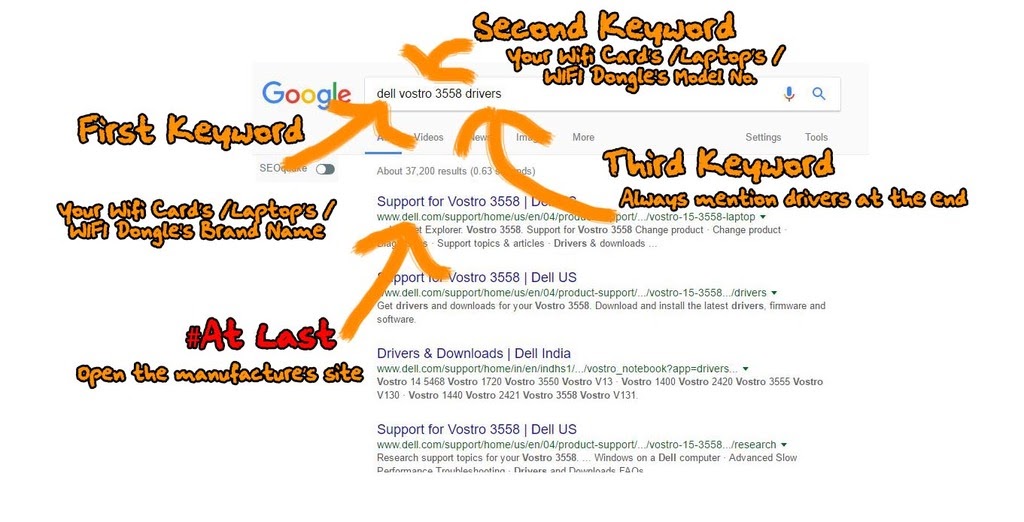 And make sure you’ll always need to remember one more thing, that the 32-bit drivers will not work on a 64-bit OS. Vice-versa installations have been known to work, but they can develop problems. 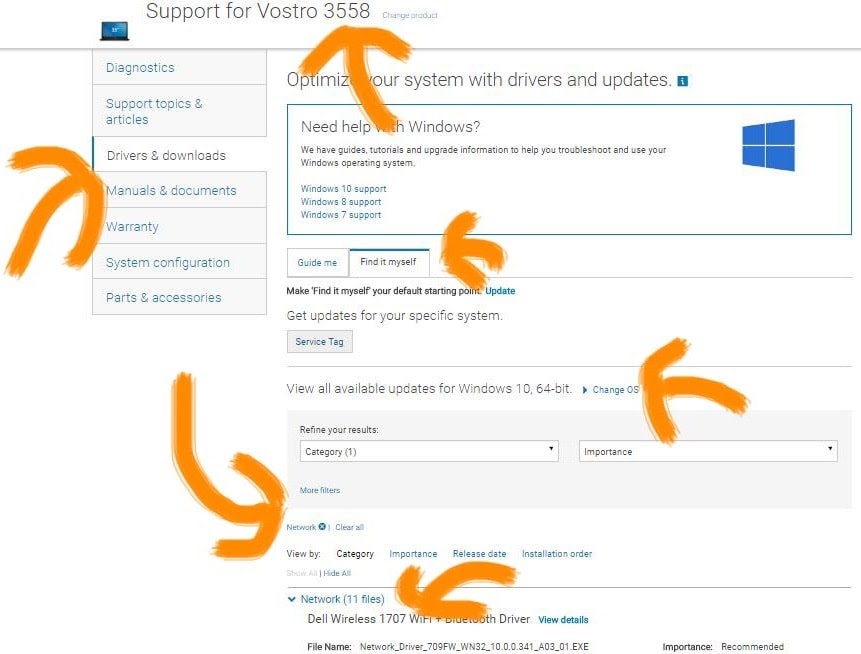 Once you have the drivers just double on it to install it and your system will show the driver’s status in the Device Manager;

>> How To Automatically Install And Update The Computer Drivers? <<