DRIVER_IRQL_NOT_LESS_OR_EQUAL is actually a Blue Screen of Death Windows Error which also knows for its error code called STOP: 0x000000D1 and in case if you are using an older version of Windows like Windows 7 or maybe like Windows Vista then it’s possible that you’ll see both of the Error Name and its Error Code on your computer’s screen when every time this BSOD crashes on your PC. Or otherwise, in Windows 10 or 8 the Error appears by showing its name only.

Basically, it’s a driver related problem of your Windows but sometimes this error also occurs because of some corrupted internal files of your Operating System too;

And just because of that, most of the time fixing this error becomes really hard to fix. But the thing is, now you really don’t have to worry about it because with the help of this tutorial I’ll definitely going to help you out to get rid of this error from your computer completely forever.

Actually, this error can occur on any version of Windows and normally this appears while working or using the computer system but sometimes, it’s also possible that this BSOD shows-up in the middle of your Windows startup with an infinite system restarts loop.

In that case, you can take some help from this suggested link: Blue Screen of Death (BSOD) Error in Middle of Computer Startup or otherwise, if you have this problem while working on your windows then just continue to read and follow every instruction one by one until you fixed your problem on your own.

So, Let’s See How to Fix This Problem;

Just like I said, it’s a driver’s related problem of your computer and most of the times your Blue Screen Dump Error will show you the drivers name of your windows which is creating the problem.

@Condition 1 – What to Do If Your BSOD Won’t Shows You Any Driver’s File Name on It?

There is 10% possibility that your computer won’t be able to show any drivers name with the error message and just only shows you the “DRIVER_IRQL_NOT_LESS_OR_EQUAL” on the screen. Which means that your computer or laptop isn’t actually able to identify that particular driver which one is corrupted and creating this problem.

In that case, you can still fix your PC but in this condition, you’ll have to contribute little bit some extra effort of yours. So, to fix this error you’ll just need to follow all the instruction given in the article linked given below:

@Condition 2 – What to Do If Your BSOD Do Shows You Some Driver’s Name on The Error Message?

After reading content from the above, I think now you do know very well about that this is mainly a Drivers related problem and you’ll have to remove or update that particular driver which one is creating this problem in order to fix your PC.

So now the main question is, How to Do That?

Mainly, the answer is in your Blue Screen Error because now you know what’s that Drivers File name which is creating this whole mess.

And in this particular guide I mainly guide you about how you can repair that driver’s file in order to fix your PC and now, you’ll just need to do one that thing which leads your computer to bring up this DRIVER_IRQL … crash on your PC’s screen;

But this time you really have to give some attention to it because this time you’ll need to note down that Driver’s file name, which is normally listed beside the Errors Name and looks like xxx.sys, or xyz.sys, or any file name who having .sys mentioned on its back.

Here’s the Example Picture of Windows 10 And Windows 7 BSOD Screen with The Drivers File Name Listed Beside the Error Name: 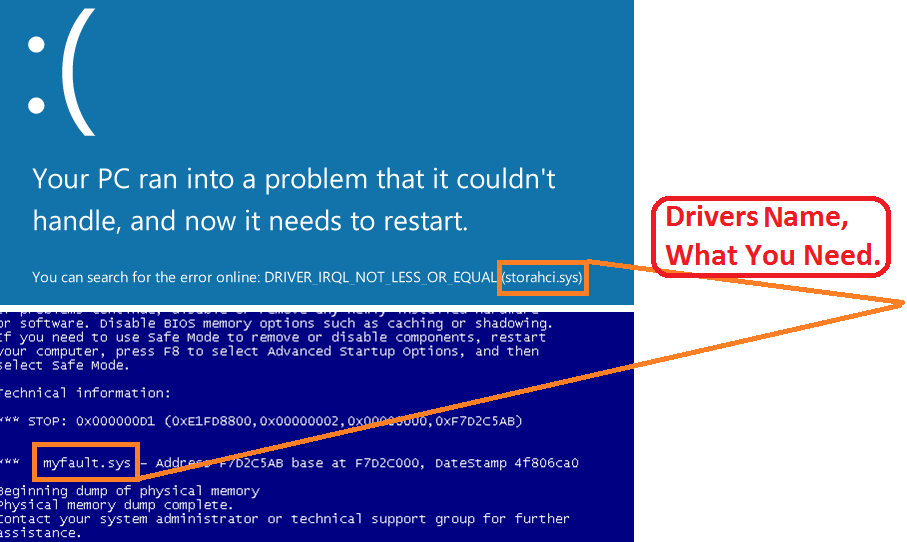 After finding that drivers file name, now it’s time to find that driver file on the Drivers directory to get the full name or description of that particular driver. Here’s a great website listed down below which you can use easily to find your driver’s name by searching that xyz.sys drivers files name on it.

Let’s take an example, suppose my corrupted driver’s file name is “rtwlane.sys” and after searching it on carrona.com, I get the full description about my driver’s file which is a WIFI driver who’s creating the problem what you can see in the given picture below:

And after searching your driver’s file name on the Carrona.com, first, you’ll need to know what type drivers yours is;

I’m only saying this because there are two different types of driver are installed in your computer, and the first one is Windows based and the other second one is Hardware based as you can see the difference in the picture given below:

Both types of drivers can be the reason for this DRIVER_IRQL_NOT_LESS_OR_EQUAL BSOD Error and to make your PC’s fixed, now you’ll just need to update that driver what you found by installing the latest version of that type of driver from the internet.

As now you know, there are two different types of drivers can cause this issue but the thing is, in between two of them there is only a single type of driver can be shown on the error message of your Blue Screen of Death.

So, Let’s See How to Update Drivers;

Windows Based Drivers (Source Windows Update) – If you find your computer is having some problem related to the Windows Driver, then you can update your Windows Drivers by using a tool named called “Windows Update Utility”, which is actually provided by the Microsoft in all of their version of Windows but download and installing a single Windows update won’t help your computer to fix this problem until you’ve downloaded and installed all the necessary updates given by the update center. So, now you’ll need to open your windows control panel and search for the ‘Update’ option and when you find it, just turn on windows update and install all the suggested updates given by the Windows Update Center.

Hardware Based Drivers (External Driver Source Website) – If you find your computer’s having some hardware-based driver problem then you’ll need to download the driver for that particular hardware from the internet.  The link given below will help you to easily find and download your hardware supported drivers:

Link >> What Is Computer Hardware Drivers & Why We Need It?

It’s possible that undertaking everything from the above won’t works for you, and it all happens when the main problem is coming from something else;

And it can be anything like a virus or maybe a corrupted registry database of your windows or something else.

To troubleshoot these kinds of problem, I also have an article what you can read where I wrote about every advanced step what you can follow to fix this BSOD problem and make everything back to normal in your computer system.