ReadyBoost is a special Disk Cache Service available in the Microsoft’s Window Operating System and it was mainly introduced when the Windows Vista came out, but you can find this feature in all Windows version after Windows Vista release. So, if you are using Windows 7, 8, 8.1 and Windows 10 then by using this feature you can use your fast removable devices such as USB Flash Drives, Secure Digital and Compact Flash Memory Cards for speeding up the smaller random disk process in your computer. 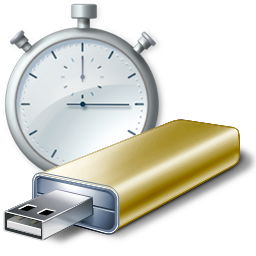 Mainly ReadyBoost helps our computer system to improve the amount of Physical Memory available in our PC and increase the productivity of your hard drive installed in your system. It was a highly promoted feature and it may be useful in some limited circumstances.

Previously I also wrote about this, what is this ReadyBoost and how it’s working and something also about its performance on my this “ReadyBoost – Explained With Uses And Features” article which you can also check if you wanna to know more about it.

So, mainly people having this ReadyBoost Not Working problem in three different conditions and every single condition having its solution and that’s why in this article I wrote about everything that you’ve needed to know to fix this problem. 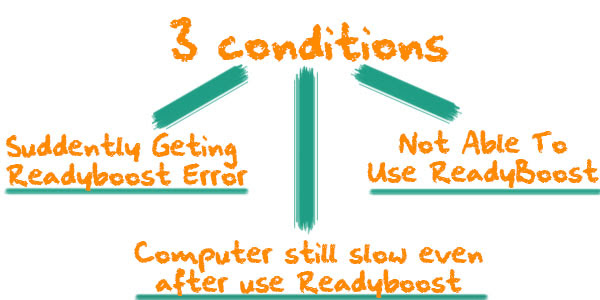 Here’s’ the list of all three possible conditions what user is normal suffering from:

These are the kind of problem what users are facing nowadays and now I’ve written all the solution down below according to the particular situation. So, I started with the first one and then go to the others and yes, you can skip all the solution listed in that particular condition’s solutions if that won’t match your situation.

If you are having this kind of problem with you then it’s possible your pen drive’s saved ReadyBoost cache got corrupted and creating some kind of problem. The solution for this problem is very simple and by just doing a single thing you can fix your problem.

So, now the one thing which I want you to do is to format your Pendrive first and then make it ReadyBoost again, just as simple.

That’s the only thing (Formatting Pendrive) which you need to do for now, if that won’t solved your problem for you then it’s possible your windows having some problem in it and to fix that, you can try some solution listed in the Condition No. 2 solutions down below.

Solutions For Condition No.2 – Not Able To Use ReadyBoost

If you are having this condition with you then it’s 100% possible you aren’t able to use your Pendrive for ReadyBoost because of some kind of error in the ReadyBoost tab in you pen drive’s properties window.

So, there are a lot of kind of thing which won’t let your Pendrive to use for ReadyBoost and showing you “This device cannot be used for ReadyBoost” or maybe some kind of other ReadyBoost error.

Here’s The List Of Problem Which Creates This Issue:

Not just Pendrive compatibility, if your computer is using SSD (Solid State Drive) for its primary windows partition then its 100% possible your Windows won’t let you use your pen drive for this feature either. SSD is a way more better than a normal hard disk drive because its provide 10 times faster speed compare to a normal HDD.

#Device Is Used By Some Program, Fix.

If none of the above solutions is work for you then it’s possible this problem is related to your Windows Operation System. Most of the times this problem can be fixed quickly but sometimes it does create some problem even after trying everything.

Now the thing is, you don’t have to worry about anything because I have written all the solutions which can fix your issue 99% and in case if you can’t able to fix your ReadyBoost, I have also written some hacking tricks to make your system fixed definitely. Or otherwise, if nothing works then it’s 100% sure it’s your pen drive’s fault because it’s possible your external drive isn’t compatible with the ReadyBoost.

So, there are couple of methods now you’ll have to try to fix this issue and those two methods are:

Actually, I’m talking about is to delete those folders what your windows automatically made when every time you use a new or formatted Pendrive for ReadyBoost in your computer to make a bit use out of it.

Make sure you disconnect your Pendrive first:

To open the windows registry you’ll need to press Windows + R Key on your keyboard and when the run commander comes up on your screen, just type the “regedit” in the blank field and press enter.

After that here’s the path listed down below which you’ll have to follow in your registry: 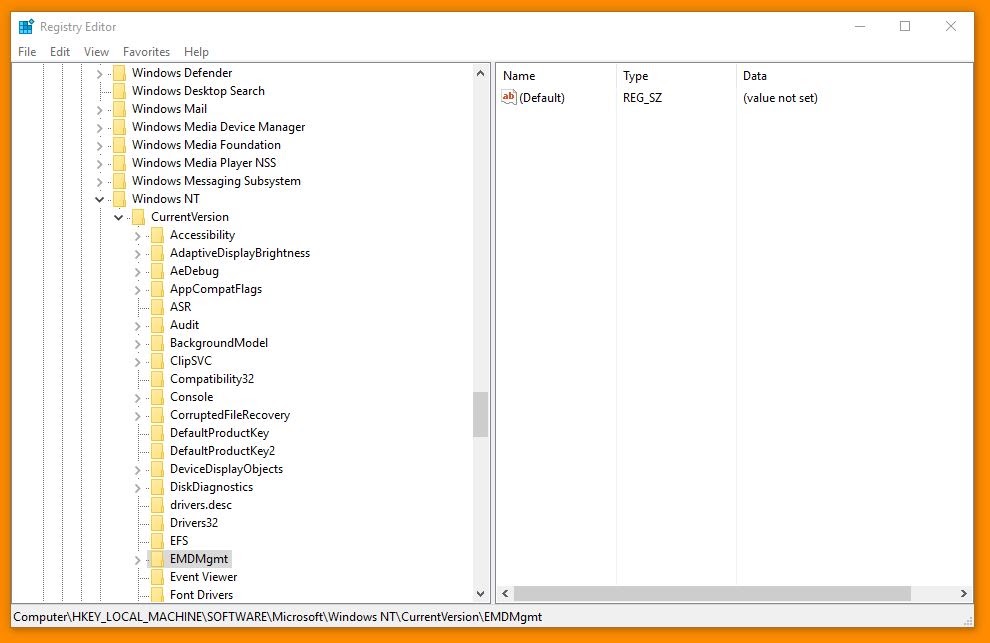 After when you reached to that EMDMgmt location, now you’ll have to unfold that folder and in that location, you’ll find every saved folder related to the all connected pen drives who was connected to your computer. Now just right click on the selected folder and click on “Delete” option and then press “Ok” to confirm it.

Just delete every folder listed in the EMDMgmt folder and after that restart your computer. 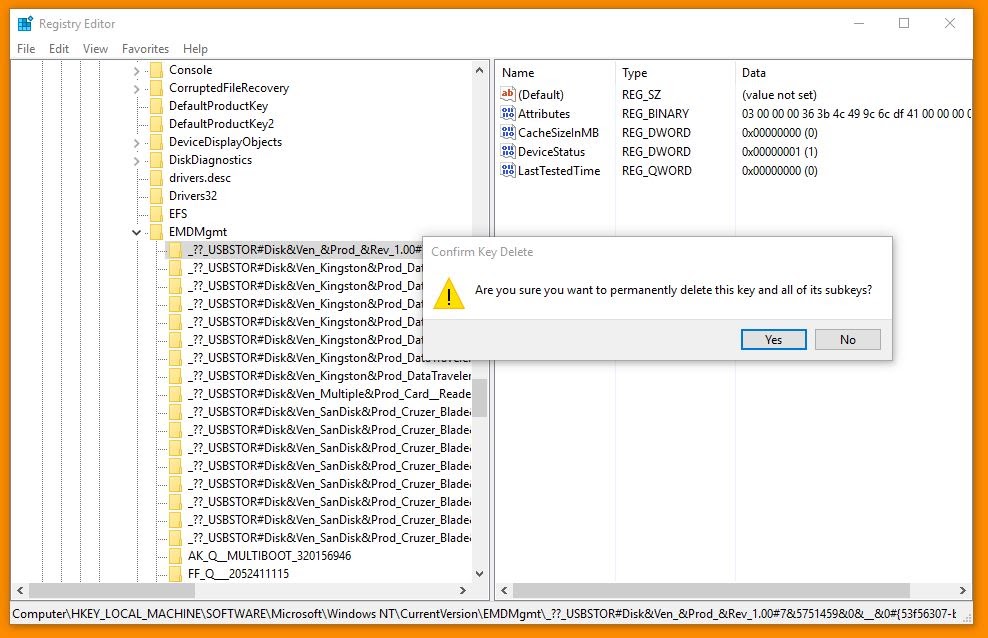 After a restart, just connect your Pendrive again and try to use it for the ReadyBoost. If your computer’s ReadyBoost doesn’t work again this time also, then move to the next method written down below and make sure you didn’t remove your Pendrive this time.

So, now I want to open your Windows Registry again and go to that same path where EMDMgmt folder is located just like you did in the previous method.

After when it’s get opened, you’ll see there is a single folder listed under the EMDMgmt folder because you’ve only connected your Pendrive once after deleting all the folder.

Now I want to click on that folder and when you click on it, it will display all the saved registries in that folder on the right-hand side portion, like the picture given below. 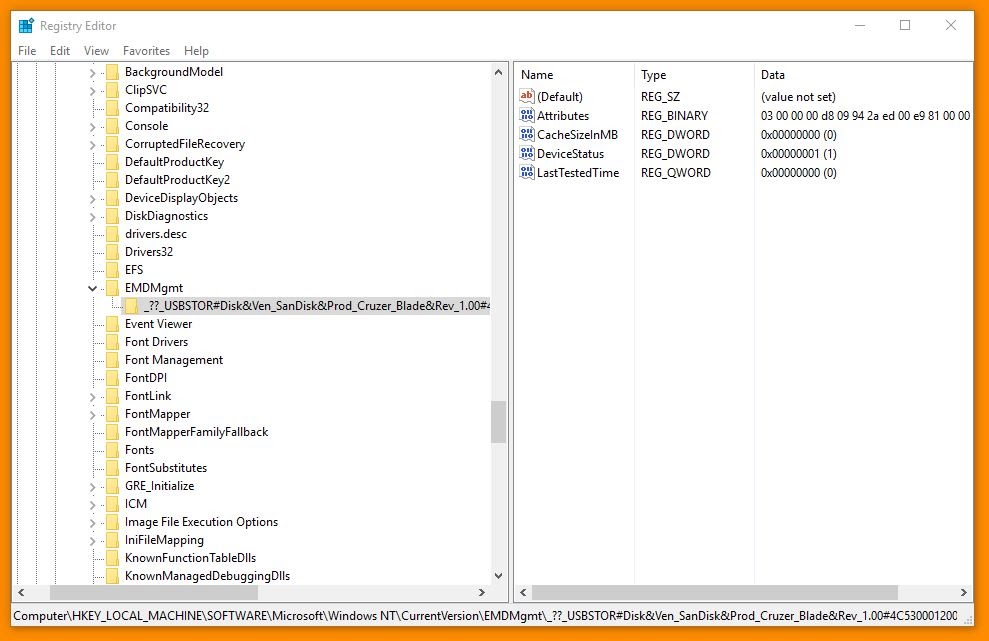 After that open these listed registries by double clicking on it and change the value which I’m all suggested, make sure you only open suggested once. 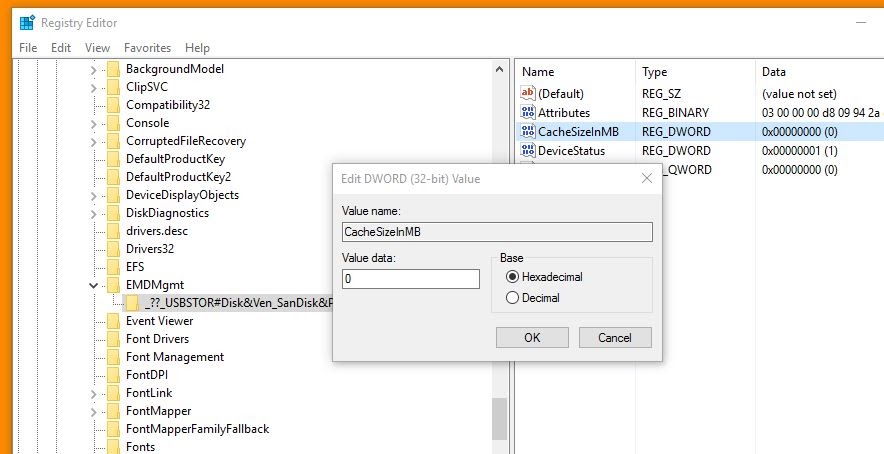 Just change all the value one by one and then try again to make your Pendrive ReadyBoost. If this solution won’t works you either, then I have also two more bonus methods for you to try and maybe that will work for you.

Bonus Method 1# What You Can Still Try

In this bonus method I want you to make a new registry in that EMDMgmt folder and this time, it will make your Pendrive working for the ReadyBoost. 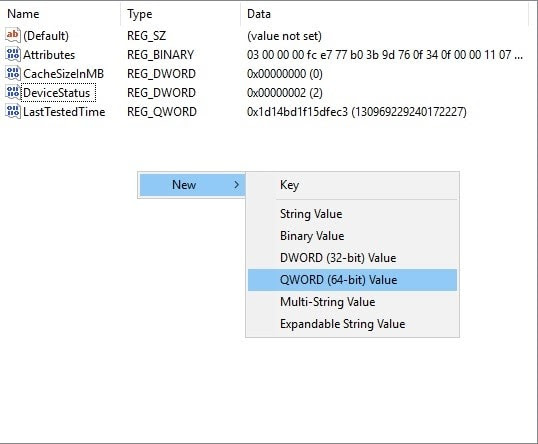 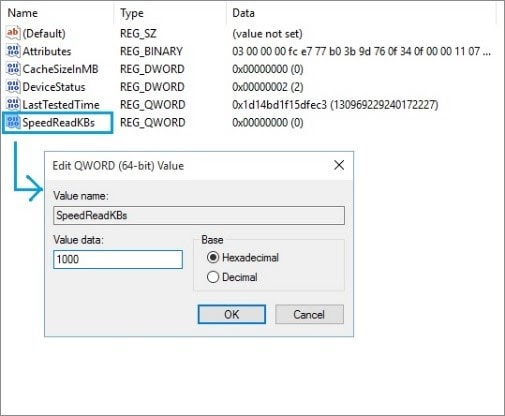 Bonus Method 2# What You Can Still Try At Last

If you having a bad day then it’s possible the above hack also won’t works for you. So, here’s the another hack which maybe gets beneficial for you.

So, I want you to open your Windows Registry again and try to do what I’m told you in method #1 again, the Pendrive folder deleting thing and restarts your computer.

After that, open your registry and when it’s get opened, press Ctrl + F Key on your keyboard and that will show you a search and find popup on the screen.

This popup searches files or folder only in the windows registry and I now want you to search this “Rdyboost” keyword in the search box just like the picture given below. 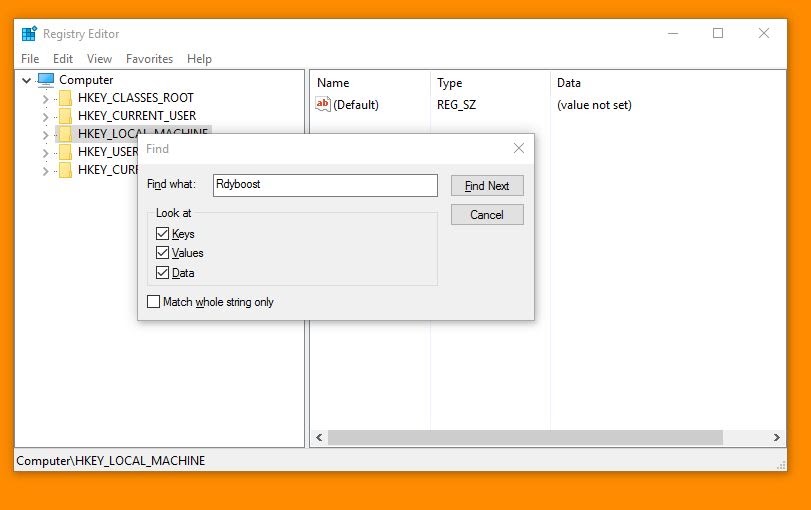 The rdyboost folder looks like the picture given below as you can see and if you can’t see that folder after clicking on the “find next” button, then I want to press F3 key again and again until you’ve found that folder. 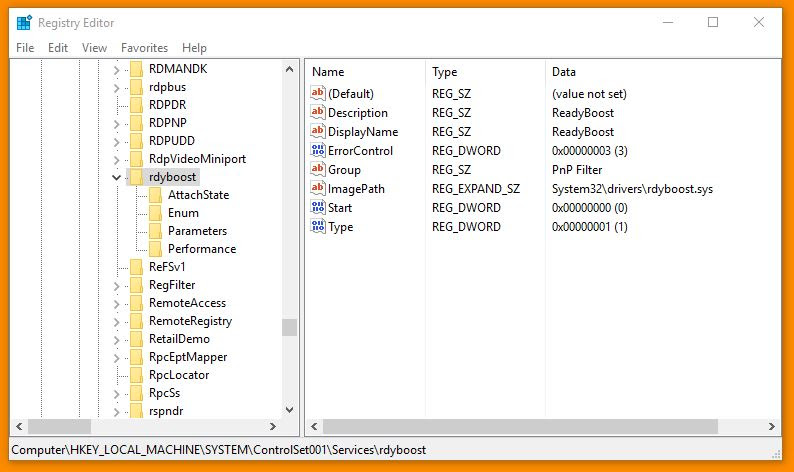 Then unfold that rdyboost folder and after that click on the “AttachState” folder which you can found under in it. Now in that folder, I want you to check every registry is set to the Value 0, if not then change it to the Value 0. 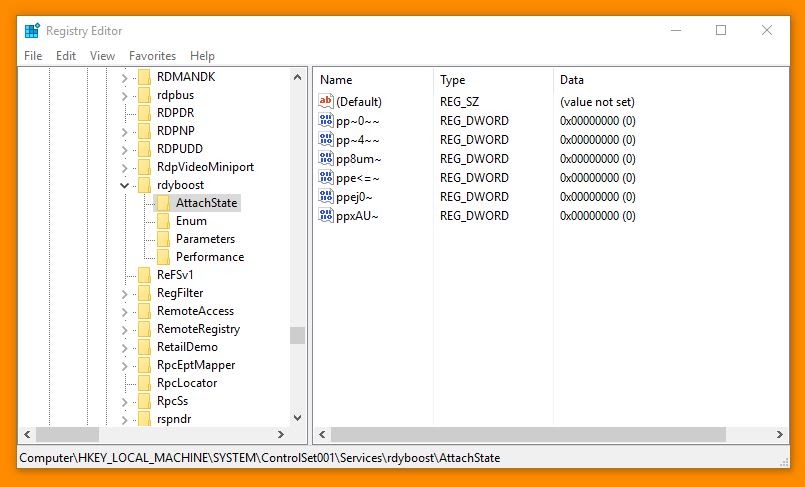 If this trick won’t works for you again, then now 100% it’s your pen drive’s fault or maybe your windows is corrupted and in that case, you can try to use some another Pendrive or maybe reinstall your Windows.

Solutions For Condition No.3 – Computer Still Slow Even After Use ReadyBoost

If you’re thinking you just plug your USB drive into your computer and enable the ReadyBoost feature in it and that just make your computer fast, then your fully 100% wrong with your this theory. You know why because there are some different conditions and requirements is needed for your ReadyBoost to work properly and show you the real performance.

Here’s list of things which does effects ReadyBoost speed:

Here’s list of things which can get you the best possible performance from ReadyBoost:

So, I’ve done my best to write every possible solution which can help you fix your “ReadyBoost Not Working” problem from your computer and a lot of people also mail me about they fixed their problem by taking help from this tutorial and it really makes me feel good that I can help you somehow.

Sometimes I failed to help some people because their computer is in really a bad condition and those all solution isn’t helpful for them.

If you aren’t able to fix your problem then you don’t have to worry about it and I also don’t suggest people to use this feature either. You know why because this ReadyBoost will gonna boost your systems performance only by 1 or 2 percent and yes it’s true and believes it or not but this 1-2% isn’t that beneficial for you while you are working.

If you really wanna to speed up your computer then the best and greatest thing what you can do to your computer is to install a new SSD storage in your system or maybe add some more ram into it.