The MBR or you can say Master Boot Recode, is the most important Boot Sector of any computer’s Hard Disk Drive or SSD. Mainly MBR has all the partitions records, like in which drive the OS is located or some information about the partitions size and name etc.

If something happens to the MBR, then it’s quite possible that you are having some booting issue with your operating system;

I’m only saying this because BIOS is the one, who actually look for the MBR in the first partition of the system drive to boot the OS into the RAM. If anything goes wrong in the MBR then you’ll need to rebuild the whole Master Boot Recode on your own in order to start your computer.


These are a lot of reason which can affect your computer’s MBR, and it can be anything like a recently installed software or a virus or maybe the collection of some bad Windows registries.

And it’s always better to get it repair as soon as possible:

So, Let’s See How to Fix the Corrupted Boot Volume of Your Computer:

Actually, there are two different methods that you can follow to fix your computer’s Master Boot Record and those are:

But in this article, I only highlight the instructions of second method to fix the boot drive because I already wrote about the whole process of Startup Repair in my previous article. As you can check out here >>Startup Repair – What It Is and How to Use It?

Startup Repair is a great tool when it comes to fixing the boot related problem. So, try to use the given link and follow the procedure to fix it automatically.

As far as I know, it’s possible that most of the times using the Startup Repair tool won’t really works;


But that’s the case where the second method comes in. Now you just need to open the CMD on your computer & input some commands, and that’s it.

To do that, first, you’ll need to start the CMD (Command Prompt) on your un-bootable OS computer. I know you’re thinking that how you can run the CMD program when the Windows isn’t working, and for that you can check out this link to find the answer. >> 4 Different Ways to Run CMD on Your Computer

After when you successfully open the CMD, then now it’s time to repair your PC’s Hard Disk Boot Volume by typing some simple commands in it. 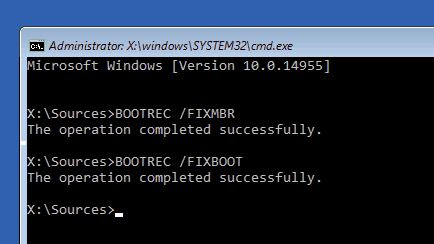 To see the changes, restart your computer when both commands get successfully executed. If the above commands won’t work, then again start the CMD again on your PC and follow the given commands given below.

If in case the problem still exists even after trying both of methods and list of commands then it also possible that the whole OS got corrupted and the only way to fix it by reinstalling the operating system.

For that, you can follow this link: >> How to Install Windows?